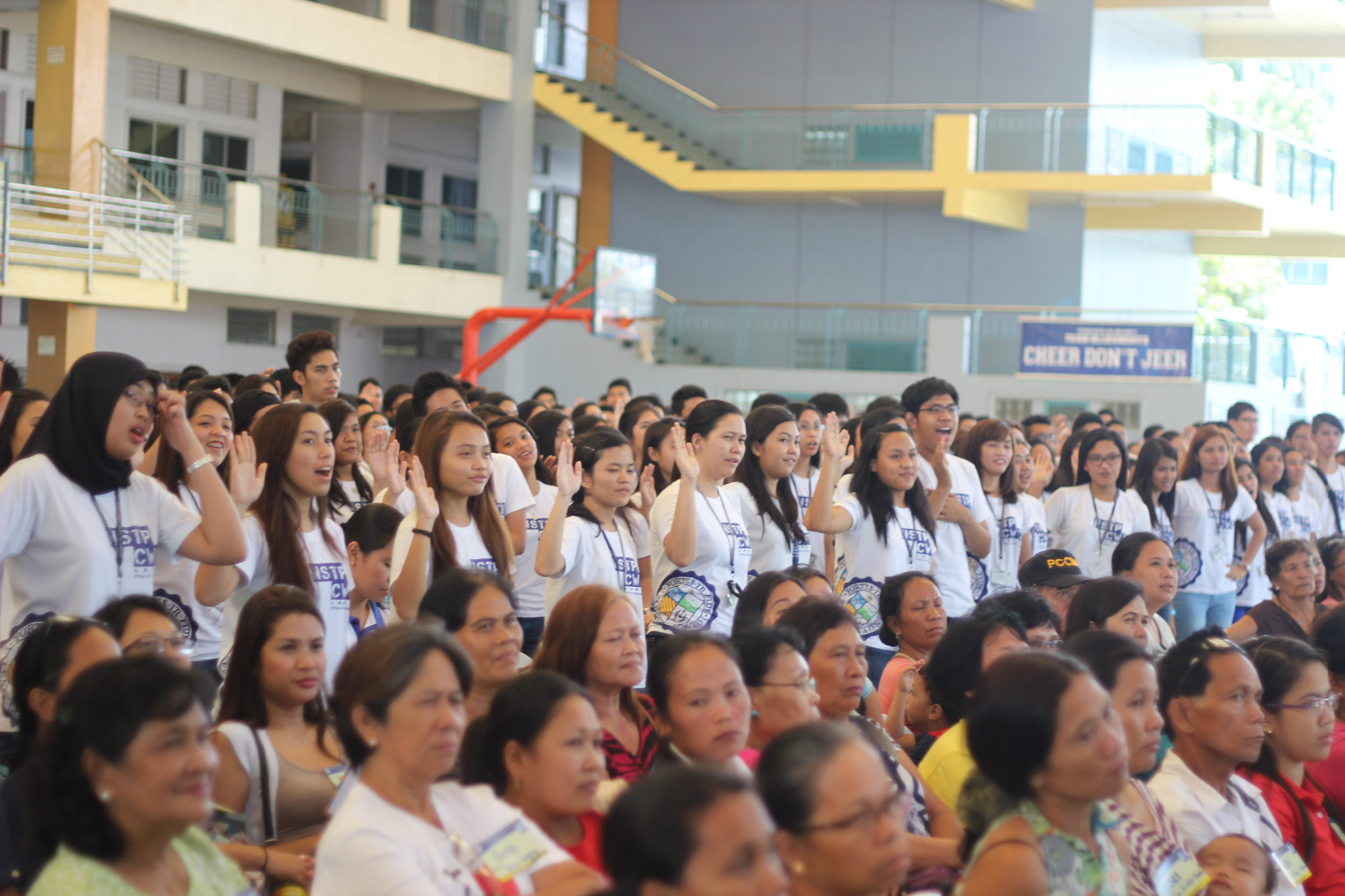 The National Service Training Program (NSTP) under the Arrupe Office of Social Formation (AOSF) of the Ateneo de Davao University (ADDU) held its graduation ceremony on Saturday, 21 March 2015, at Martinez Sport Complex in the Matina Campus.  The program graduated a total of 1,972 students who fulfilled the requirements of the Civic Welfare Training Service (CWTS), one NSTP component implemented by ADDU, for the school year 2014-2015.

This year’s NSTP commencement exercise carried the theme “NSTP-CWTS: Renewing its Commitment to Respond to the Needs of Communities in the Peripheries” and was graced by no less than ADDU Academic Vice President, Fr. Jose Gabriel T. Gonzalez, SJ, accompanied by the Director of the Ignatian Spirituality and Formation Office (ISFO) which directly governs Arrupe-NSTP, Mr. Elvi C. Tamayo; the Director of Arrupe-NSTP herself, Ms. Lilibeth L. Arcena; and, the director of the University Community Engagement and Advocacy Council (UCEAC), Atty. Romeo T. Cabarde.  Aside from the students and formators, the NSTP partner communities-institutions also attended the special event.

This is the third “formal” graduation ceremony conducted under AOSF (as compared to the previous year’s conduct of an “informal” culminating activity).  This is also the third year that the NSTP-CWTS conferred graduation awards to exemplary class team leaders, student volunteers, NSTP formators, partner communities-institutions, and community projects.

For this school year, the program recognized and conferred the Blue Knight Sui Generis Award to 3 (out of 208) team leaders, in a total 52 NSTP classes. The Blue Knight Sui Generis Award, also called the Outstanding NSTP-CWTS Team Leader Award, is a special award named as such to help promote the ideals of the Ateneo de Davao University leader sui generis, a leadership principle based on the characteristics of Ignatian leadership and spirituality.  The recipients of this award are Mary Rose E. Catalbas of Section Bio 2A under the class of Annabel Bauzon, Mariel Mae E. Maculbe of Section Che/COE, under the class of Julius Placer, and to Louis F. Palma Gil of Section AMS 2/ASS2, under the class of Gina Villagonzalo. Ms. Palma Gil delivered a response on behalf of the awardees and the NSTP graduates.

The program also conferred the Richie Fernando Award (so named in honor of one of the Jesuits’ 20th century young heroes: Richie Fernando) to an outstanding NSTP-CWTS volunteer who approximates the dedication and service of Bro. Richie to the marginalized sector.  He was a young Filipino Jesuit missionary in Buddhist Cambodia where he worked as a teacher in a Jesuit Refugee Service (JRS) technical school for the handicapped. He died while preventing a student from throwing a hand grenade to a room full of students.  In his life and unto his death, Richie Fernando has exemplified how it is to live a person for and with others, a life of selfless commitment to those whose lives are being rehabilitated after a prolonged period of war and violence. The recipients of this award for this school year are Jesse M. Alcaraz under the class of Elvira Tabamo, and Ashreabai K. Sinarimbo under the class of Mailah Demonteverde. Both are also members of the roster of Arrupe volunteers.

Another major recognition given during the graduation ceremony is the Exemplary Community Partner Award—a special award conferred to community partner that exemplifies an active well-functioning community/organization, showing active involvement through the concrete projects being implemented in the community itself, and through the active participation of its community leaders and members for the entire duration of the fieldwork. Purok 5 in Brgy. Tacunan in Davao City, assigned under the class (Che/COE) of Mr. Julius Placer, is conferred this award.

Moreover, the Outstanding Community Project Award (based on last school year’s projects [2013-2014]) is a special award presented to an NSTP-CWTS class whose actual project has exemplified excellence and substance in terms of concept, relevance and viability, as well as addressed medium-term to long-term needs of the community.  Also, the implemented project has provided a good and appropriate venue for active involvement of both students and community members. It has shown to have incurred minimal cost without sacrificing quality output and has been responsive to the felt-needs of the community. The implemented project, therefore, has not only served but has also been beneficial to the needs of the greater community while realizing the goals of student social formation. The Outstanding Community Project Award is conferred to the following namely: first, “Tukod Kapilya: Pagpalig-on sa Espirituhanong Pagtuo” of Team Faith that Does Justice (under Gina Villagonzalo) with project partner, San Isidro Labrador Chapel, Purok 18, Upper Mintal; second, “First Aid & Disaster Risk Reduction Mgt. Training” of Team Angel Bugels (under Jorge Yap), with project partner Brgy. 31-D; third, “Proper Hygiene IEC & Distribution of Hygiene Kits” of Team Justice League & Libera (under Ryan Rolf Fuentes), with project partner San Isidro Labrador Chapel, DFL Village, Dumoy, Toril.

Ms. Arcena delivered the annual Director’s Report, covering the entire achievements of NSTP-CWTS program for this school year. She highlighted in her report that the total costs of the projects implemented by NSTP students amounted to PhP 814,710.75 which benefitted nineteen (19) barangays, five (5) institutions and five (5) parishes. Whereas, the total costs of project counterparts shared by partner communities-institutions amounted to PhP 59,557.46.

An audio visual presentation (to the tune of the popular song “We Can Be Heroes” of Alesso) documenting the duration of the 9-week fieldwork was shown immediately thereafter for the audience’s appreciation.

The certificates of completion was systematically distributed to the graduates representing the different schools: For the School of Arts and Sciences (SAS), Zoie Acasio from SECTION ASS2B; School of Business and Governance (SBG), Pocholo Quidangen of BSACT 2D; School of Nursing (BSN), Danielle Marie V. Samblaceña of BSN2A; School of Engineering and Architecture (SEA), Gerald Belvis of ME/IE 2; and School of Education (SOE), Camille Gianne Pasco of BEED/BSED- Math. The NSTP/Arrupe volunteers who are graduating this school year were also given special recognition for having served the program for the duration of their volunteering work as students in ADDU.

Immediately thereafter, Fr. Gonzalez delivered his message to the graduates.

Michael Zachary Leyson, incoming SAMAHAN president for school year 2015-2016 and an NSTP-Arrupe volunteer himself, led the recitation of the National Service Reserve Corps (NSRC) Pledge (based on the provisions found in Sec. 11 of the Republic Act [RA] 9163 or the NSTP law and Sec. 13 of RA 10121, also known as the Philippine Risk Reduction and Management Act of 2010).

NSTP-CWTS program coordinator Ms. Agnes Sagaral was the master of ceremonies. The graduation ceremony commenced from 8:00 until 11:00 o’clock in the morning. It was preceded by a celebration of a Holy Mass presided by Fr. David John delos Reyes, SJ, the executive secretary of the University Research Council (URC) and part of the roster of Guides of the First Year Development Program (FYDP).