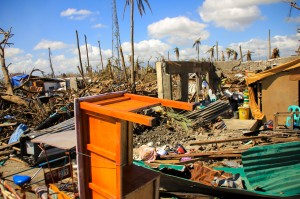 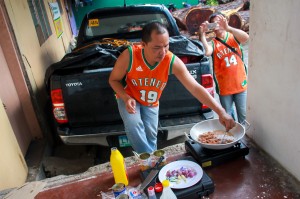 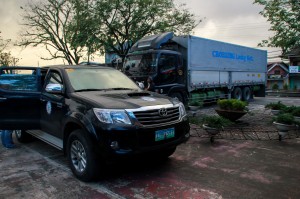 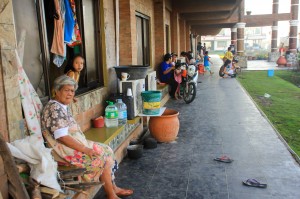 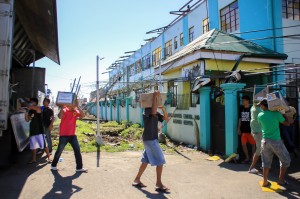 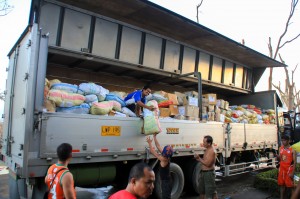 Just over a month short of commemorating the catastrophic effect of Typhoon Pablo, the university is at it again. And this time, it is responding to an even bigger challenge of mounting a relief and humanitarian operation to as far as the Municipality of Palo in Leyte, to reach those who survived the massive devastation wrought havoc by Super Typhoon Yolanda on 8th November of this year.

Reminiscent of the Ateneo de Davao University’s (ADDU’s) bold and massive response to last year’s devastating impact of Super Typhoon Pablo which rampaged through eastern Mindanao, the university community generously pooled together its available resources, including that of its donors, to send a mission team to Palo.  Consisting of Mr. Karl Anthony Ebol, the Community Engagement Officer (CEO) of the Arrupe Office of Social Formation (AOSF) who headed the five-man team, and assisted by members of the university’s service and security force such as Rolly Canete, Paterno Cascaho, Jocyl Lenaming, and Ramel Polancos, the mission team delivered sixteen (16) tons of relief goods (consisting of 2,204 food packs, as well as 176 boxes of water, clothes, hygiene kits and blankets) to the Archdiocese of Palo.  It also turned over medical supplies amounting to PhP 5 million (including fifty-five [55] boxes of urgently needed IV fluids) to a functioning emergency unit in Palo, courtesy of GBF Pharma which channelled its donations to the university.

Just as ADDU specifically directed much of its relief operations to parishes and a network of schools through the Davao Association of Colleges and Schools (DACS) when it deployed its humanitarian response in the aftermath of Pablo, it again made use of its diocesan contact through Fr. Oscar Florencio of the Social Action Center of the Archdiocese of Palo in coordinating and facilitating the release of its relief goods. The medical supplies were directed to Palo’s Schistosomiasis Control and Research Hospital, through Dr. Agnes Aliposa (chief designate), one of the few functioning hospitals that survived Yolanda’s onslaught.

The mission took a good four (4) days to complete, departing ADDU on 15th November and arriving on 18th November.  In tandem with a pickup Toyota Hilux which served as the personnel carrier, a ten-wheeler cargo truck ferried the loads of good to Palo.  The travel passed through Ormoc City before reaching its destination.

The mission team faced anticipated logistical difficulties because Leyte happened to be one of the most widely and badly hit by Yolanda. Bringing within them their own supply of food and fuel, the members of the team managed to camp in a damaged office in the archdiocese in the course of their trip.  Fuel supply became a major concern in ferrying massive tons of relief goods since the nearest fuel source is a good three (3) hours away from the municipality.  The Archdiocese of Ormoc was kind enough to provide the team additional fifty (50) litres of diesel fuel so that it can complete its journey to Palo and back to Davao City.  In turn, the team handed over twenty-five (25) more litres of fuel to the Archdiocese of Palo to be used for its own set of vehicles in its relief operations.

As shared by Fr. Florencio, the Municipality of Palo took a heavy pounding from Yolanda’s wrath.  Combined with an onslaught of raging water as high as eight (8) feet and gale force winds of over 315 kilometres per hour, much of the town was inundated, sparing nothing, not even buildings that were believed to be strong enough to take on massive water surges and fiery winds.  And neither did Palo’s churches, both new and ancient – churches that had witnessed the early missionary zeal that animated these enclaves of Christian communities through the centuries.  Many of these centuries-old churches that dotted parts of eastern Visayas stood the test of time, including many weather disturbances that passed this way through the years; these churches have nonetheless played witness to the region’s history and development.  And yet it took only one fateful day in November 2013 to tear them down, courtesy of one of the world’s most devastating storms ever recorded.

According to Fr. Florencio, the total number of families affected in Palo reaches 100,000, with the death toll still rising and untold hundreds still missing.  At present, the archdiocese now serves as one of the most organized evacuation centers in the municipality, catering to the needs of some 500 families.  The municipality expresses appeal for relief from international donor agencies, since much of the aid coming in are concentrated in Tacloban City. Aside from Palo, the other areas that are also in bad need of help are Tolosa and Tanauan.  Fr. Florencio expressed gratitude for the ADDU contingent having come this far in extending help to the people of Palo.

Also in the thick of responding to immediate medical needs among Yolanda survivors are the hospitals in Palo that were largely destroyed and in dire need of more medical supplies, equipment and personnel. Dr. Aliposa expressed gratitude for the medical supplies provided for by the ADDU community and GBF Pharma. (By M. Isabel S. Actub, Arrupe Communications & Advocacy)