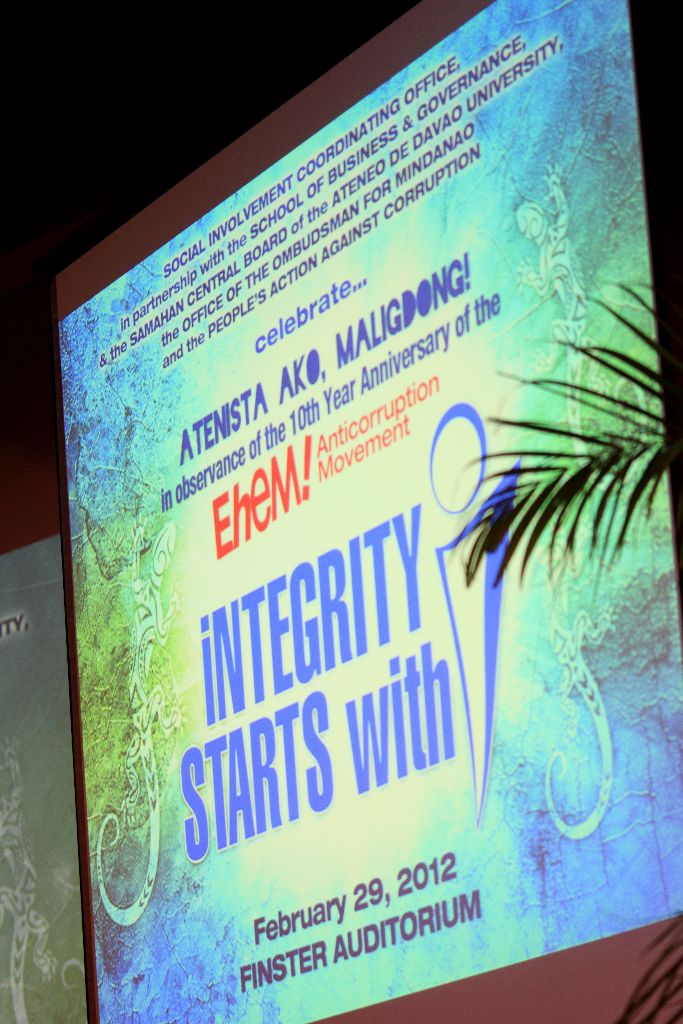 Integrity Starts with “i”

Every year since 2004, the Ateneo de Davao University celebrates the Atenista Ako, Maligdong!–a month-long campaign to promote the culture of integrity, academic honesty and good governance, particularly in the life of the university. This campaign is spearheaded by the Social Involvement Coordinating Office (SICO), the social arm of the university, through its Communications and Advocacy Program. This celebration is the university’s commitment to live out its core institutional values that put a premium on academic honesty and accountability, responsible use of human freedom, greater sensitivity towards pressing social realities and a culture of leadership that emphasizes personal discernment leading towards reflective action for justice. Through the practice of these values, as promoted by the celebration of the Maligdong month every February, the university is providing a fitting venue to build a community of men and women who–animated by a healthy spirituality that guides one’s relationship with oneself, with others, with the world and with God–are the living expressions of a life of integrity, a life of moral righteousness that is generously lived for the service of others.

Last 29th February 2012, SICO in partnership with the School of Business & Government (SBG), the Samahan Central Board (SCB), the Office of the Ombudsman for Mindanao and the People’s Action against Corruption (PAAC) successfully celebrated a whole-day forum at the Finster Auditorium in commemoration of the 10th year anniversary of the Ehem! Anticorruption Movement. This event was lodged under the Atenista Ako, Maligdong! a SICO program that promotes the culture of integrity and good governance in the life of the university. The forum carried the theme iNTEGRITY STARTS WITH “i.”

The forum was attended by over 180 participants coming from different sectors that formed part of the network of SICO and its co-convenors. There were representatives from the different academic institutions in Davao, both public and private. There were also participants coming from several parishes and religious congregations, NGOs and civil society groups, the business sector and the media. What was gratifying was the strong presence of several government agencies such the Office of the Ombudsman for Mindanao headed by Deputy Ombudsman Hon. Humphrey Monteroso; the Commission on Audit (COA) headed by Regional Director Hon. Manolo Sy; Bangko Sentral ng Pilipinas headed by Regional Director Atty. Demetrio Casipong; and the Department of the Interior and Local Government (DILG) headed by Assistant Regional Director Hon. Tomas Rodriguez. Several regional offices of the NEDA, LTO, DAR, DILG, DAP, NIA, DepEd, NFA, DOH, DOA, Parole and Probations Administration, and the Philippine Coconut Authority also graced the occasion. There were also participants representing the Office of the Ombudsman for the Visayas, as well as representatives from local government units (LGUs) of Laak, St. Tomas, IGACOS, and Misamis Oriental. Mr. Leon Flores, the chairperson of the National Youth Commission, was also present during the celebration.

The forum featured the following highlights: A history of the Ehem! movement through the years, given by team leader Fr. Albert E. Alejo, SJ; three case studies of anticorruption initiatives done in different sectors such as the academe (given by Ms. Lilibeth Leh-Arcena of SICO), civil society groups (presented by ADDU BOT member, PAAC co-convenor and PPVR convenor, Mr. Lizada) and the government (presented by Deputy Ombudsman for Mindanao Hon. Monteroso); a forecasting of the state of corruption in the Philippines presented by Ehem! national coordinator, Dr. Ronnie Amorado; a sharing of the initiatives of the Kaya Natin Movement for Ethical Leadership and Good Governance, given by the former Isabela Governor Hon. Grace Padaca; and a legal/political view of the impeachment trial of Chief Justice Renato Corona, presented by another ADDU BOT member and former RTC judge, Atty. Dory Avisado of the Transformative Justice Institute.

The well-attended event gave a strong indication that the Ehem! Anticorruption Movement has indeed borne fruit, as evidenced by the movement’s birthing and evolution, including its success stories, its failures, and the gargantuan challenges it has faced in the past decade. And though there is still so much to be done in nurturing the seed that was sown in the past ten years, the overwhelming presence of SICO’s external partners and networks during the gathering at Finster Auditorium has provided a good reason to pause, and to celebrate, and to continue to hope that the common aspiration to eliminate corruption is a noble cause that demands collective participation and collaborative partnership across different sectors in Philippine society.

The SICO staff were among those first given the trainor’s training of the Ehem! module and therefore partnered with the Ehem! national core group in giving the seminar. Since its implementation, the Ehem! Anticorruption Sensitivity Orientation Training has been given to SICO volunteers, different sectors within the ADDU community, and SICO’s external partners. Consequently, it has been integrated into the curriculum, courtesy of the partnership between SICO and the Theology Division.

Meanwhile, the February event formed part of the year-long commemorative celebration of Ehem!’s ten years of existence. There will be quarterly celebrations this coming June and September, with a major culminating event on 9th December 2012 in time for the commemoration of the International Anticorruption Day declared by the United Nations. (By M. Isabel S. Actub, SICO)